Herp hunting has become quite the addiction. Everyday since the temps became a steady 55 degrees and warmer I chomp at the bit to go outside and flip some logs, check the stream banks, or simply walk the trails and pathways near my home here in Northern Virginia. Most of the time I find the same old same old, two line and red back salamanders, worm and ring neck, and the ever reliable eastern black rat and water snakes, green and gray tree frogs, and box turtles, broadhead and five line skinks. sometimes I get spoiled and admittingly a little bored with finding the same species but still knowing that there are other species to be found keeps the “drive” going.

Recently I have taken additional steps to promote temporary habitats for herps-mostly snakes. A recent mole king snake discovery under a tire not far from my usual stomping grounds was encouraging and therefore I took it upon myself to distibute playwood coverboards within the vacinity of the discovery area hoping to entice another mole king and anything else that might seek shelter in the region. Ideally corregated tin and carhoods would provide better hides but I think I would probably run into opposition form the locals for “trashing” the neighborhood.

So far the boards havent produced anything nor has the original tire where the mole king was found. My old coverboards from three years ago regularly produces ringneks and worm snakes. Just need to be patient I guess.


Mole King and Black Racer
Watch this video on YouTube.
Having the urge to herp sometimes requires a short roadtrip to a nearby area where it is almost a garuantee to find racers, eastern rats, worm, northern browns and mole kings. Below is just one of those places that I frequent when I get the urge to find one of the bigger and less common snakes of my area- the mole kings. 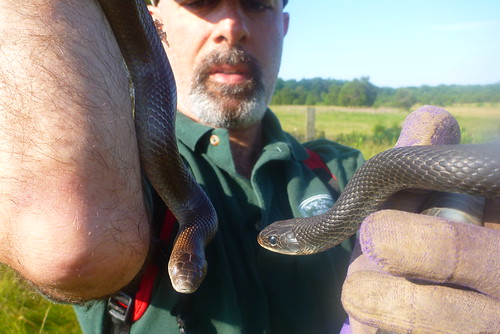 (above) Northern Black Racer on right and less common Mole King on the left. Both were easily handled without a struggle.