Evidence of troop movements or troops attaining a position to engage an enemy. Large chuncks of iron shells and canon balls fired from the opposing side during the civil war- most likely confederate- intended possibly to deter columns of union soldiers advancing on confederate lines just prior to the start of The first major battle of the Civil War.  Pictured here are pieces of 10 lb parrot and 12 lb boreman ball. The ground was litered with pieces of shell frags and lead bullet shrapnel, sometimes used inside the shells, indicate that the area must have been pretty significant. 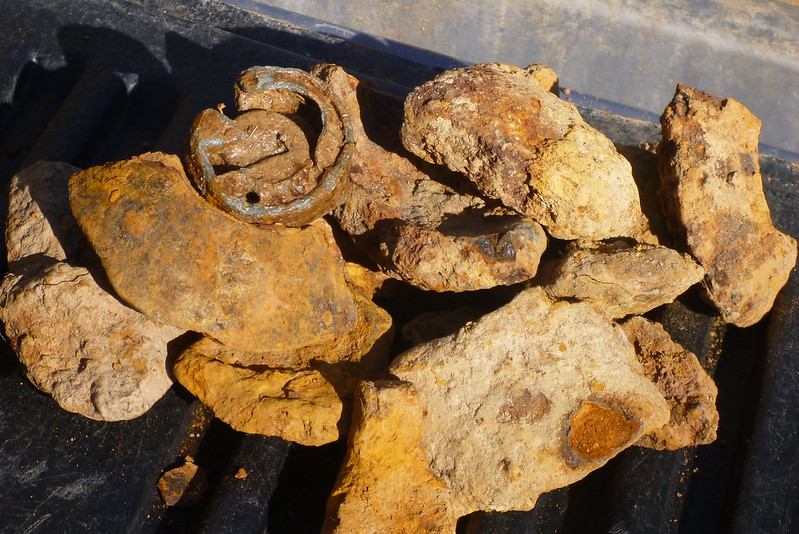 An excellent opportunity to hunt Brandy Station the site of the largest Cavalry battle in the Western Hemisphere. On this particualr occaison we were granted access to Beauregard Farm a 5,000 acre tract of land just north of Culpeper. Thousands of soldiers from both sides occupied the area and several battles were faught here. Over the years since war the area returned to a farming community. Many of the artifacts have been recovered by souvenir hunters, land owners, and of course relic hunters specifically looking for relics of that period. Agricultural practices intended to produce more crops using synthetic fertilizers and heavy machines have also taken their tol on the relics that remain. Nonetheless pieces do remain and opportunities to recover any remaining pieces do exist.
Below are some of those artifacts I was able to obtain scattered by the plow. 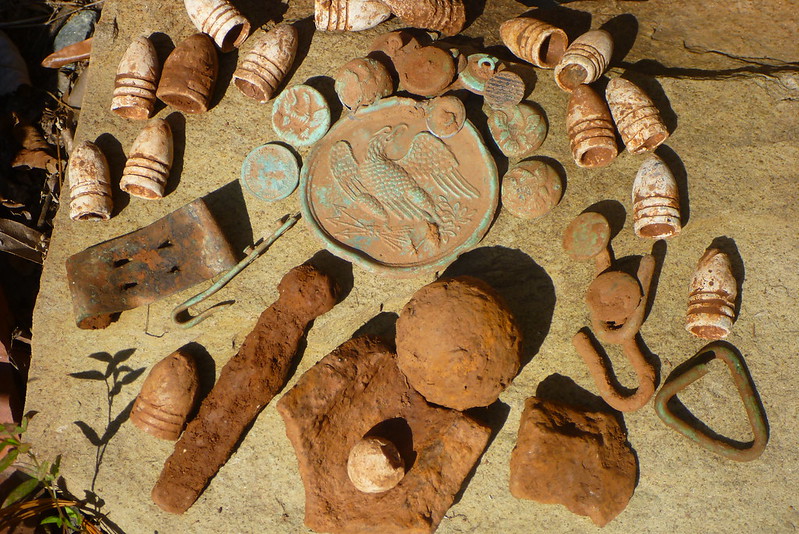 Pictured above: Breast Plate with Eagle motif most likely U.S. Some general service uniform buttons, brass knapsack hooks and pieces, a variety of lead dropped bullets, an iron gun tool, a shenckl shell frag and a large piece of canister grape shot, an 1863 Indian Head Penny and a brass belt adjuster. There were quite a bit of relics found over the thre day hunt including some soldier ID items cannon ball, sword and lots of bottles plus much more. All pieces are documneted.