I was invited to tag along with a couple of relic hunters t look for herps while they searched for Civil War Relics. The previous day they had done very well finding 3 twelve pound solid shots and one 10 lb parrot shell. So needless to say they were chomping at the bit to get back out and find more. Finding these many relics especially in tact artillery rounds is not as common as it was perhaps 40 years ago. It might hav esomething to do with the fact these were lying at the bottom of a stream and the were overlooked by land hunters. So we made our way by means of ATV’s to the site. We all geared up they had their detectors and I had my snake hook, two camaeras, back pack full of field junk, and a monopod. We entered the wate and began to navigate upstream. the water level was low and clear and the bottom hard and relatively sediment free. This made it easy to spot things lying on the bottom. Schools of various fish darted by. Some were recognizable species others were not. there were large mout and small mout bass, blue gills and otehr sunfishes, northern hogsuckers to name a few. I did find a dead otter later on. Anyway by this time (we had been in the water for about 30 minutes) and I had managed to venture about 50 yards of the others when I heard one of the guys call to me and say he had just found an artillery shell. He also made it a point to tell me that he had eyeballed it and that I had walked right past it. He called me over to show me and sure enought there it was. A 10 lb parrot shell lying in perfect view on the stream bottom.

Well the discovery of this lead to a frenzied search for more pieces and other relics but to no avail. We continued on for the next couple of hours. I was able to find a few heprs along the way and got some really cool footage of a musk turtle


Eastern Musk Turtle (Sternotherus odaratus)
Watch this video on YouTube.
the excitement was wearing off and after a long period of fnding nothing we headed back to our insertion point whic hwas about where they had found their mother load of artillery shells and cannon balls on the previous days hunt. the water was a litle deeper here and the bottm I discovered was somewhat more slippery as I soon found ut losing my footing and sliding down onto my back. My head was slowly going under as I struggle dto keep my Nikon SLR above water wit hone free hand. Just as I was about to go totally under one of the guys rescued the camera allowing me to focus on getting myself upright again. I was happy I didnt get my $2,000.00 rig wet but hen soon realized thatmy $650.00 cell phon and wallet were in my back pack that did get submerged. Now wet all over and the possibility of having to buy a new phone did not make me a happy camper. So when we finally reached the area where winserted the stream and where they found their relics the day before I stopped and asked to give me shot (no pun intended ) at findig me a cannon ball. For some reason I had this uncanny feeling that I was going to find one in their hunted out site and I justified this feeling because I deserved it after taking a spill just a few minuted earlier. The guys ensured me that the place was vaccummed but I had to try I just knew there was anotr one in there with my name on it. So they offered me a machine I went t owork. 5 minuted into the search I get a huge sounding signal that overloaded the audio tones on the detector. I flet the bottom from where the target was detects knowing that it just had to be a shell or something equivalnet. The sensation of a solid round object under by foot pastially burried n silt (this area did have a silty bottom but wasnt exactly a thick layer) didnt take me long to reach down with my hand and pull up a nice 12 lb solid shot cannon ball! I was elated and the others were in sort of disbelief. I could have kept searching but not wanting to be greedy I gave the otehr guy the detector back andtold him that he may want to try where I was and see if he could find one. Sure enough he scored with another 12 pounder. A great day for all of us each walking out a cool piece of history!! 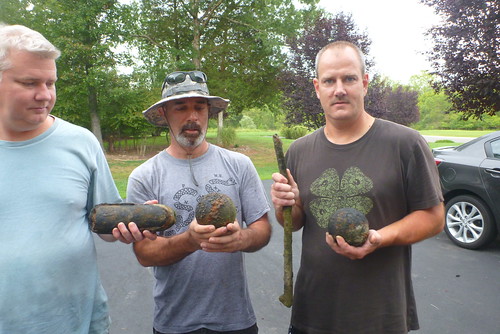