Mike kicked off the weekend with a rare and cool find. He seems to be very lucky at finding some great herps or at least unusual examples of common spcecies. After his shift was over at the nature center, he decided to check some cover boards amd logs we had laid out a few weeks earlier. In this pic Mike uses his finger to provide some scale to this metamorph Ambystomid (baby-spotted sal) he found under one of the logs. /metamorph Ambystomids are apparently
uncommon to find, but that is typical of Mike always discovering the unusual. Adult spotted sals are a bit elusive in the wild as it is given they remian underground for much of the year. As newly transformed metamorphs, however,leave their vernal pools they travel to a nearby location where they will burrow until reaching reporductive maturity. this can take up to three years.
On a previous excursion to this site back in the spring Mike and I went on, Mike discovered a rare albino eastern worm snake roughly in the same vicinity. So we will need to make this site a regular stop on our herp ventures.

Mike and I went to two of our reliable places for herps today. The first part of the day was productive but nothing new was discoverd. Mostly small critters like juvenile Queen Snake (Regina,septemvittata) several pickerel frogs (Lithobtes, palustris) a skink (Plestiodon) and perhpas the most unique for this area that morning 4-5 eastern worm snakes( Carphophis, amoenus) entwined in the decayed sawdust material that lay underneath the log. We also found some interesting fungi, re-visited the area where we found a huge channel catfish skeleton to se if it was still there and to get a better photo of it. We did! 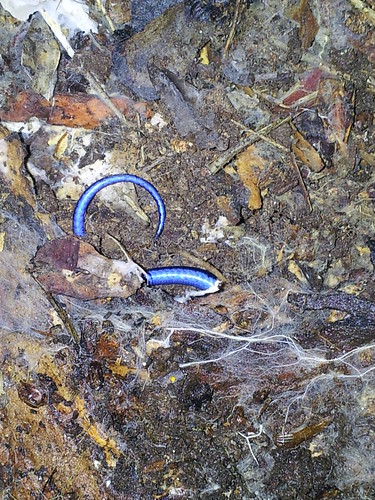 Above photo shows a blue tail to a young skink trying to avoid detection or is it? Perhpas it knows it was cornered as it saught refuge in a crevice not lare enough to hide its entire body. Maybe it was trying to expose the tail in order to protect its body. Tail Autotomy is characteristic these skinks have. 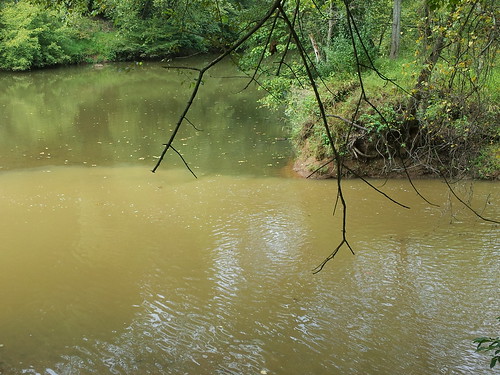 Popeshead Creek Bull Run confluence. Note the turbid water running into Bull Run from the Popeshead tributary. Probably caused by the localized thunderstorms from the night before. 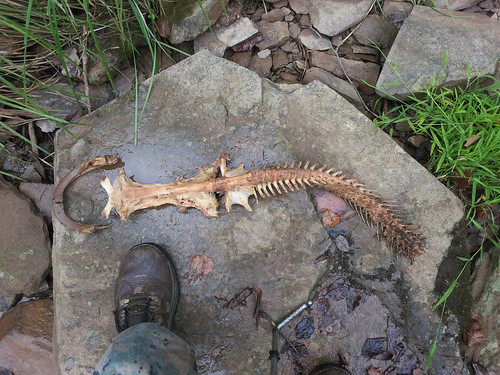 Large Channel Catfish skeleton. The river is not wider than a two lane highway and averages about 3.5 feet. if that. amazing that such a stream can support such a large fish. 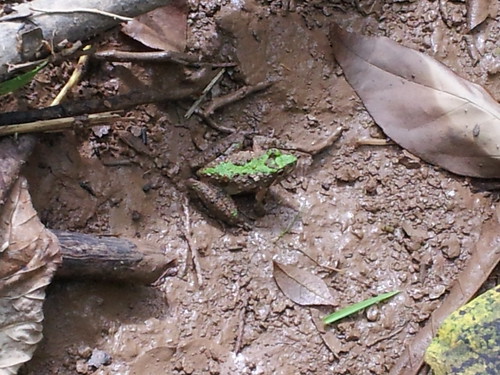 After spending some time at this location Mike and I decided to try a new place. Again nothing new in terms of species but we did manage to find some rather large Black Racers (Coluber, constrictor) abut 7, a young eastern rat snake ( Pantherophis, alleghaniensis) an baby northern brown (Storeria, dekayi) and a nice cricket frog (Acris crepitans). 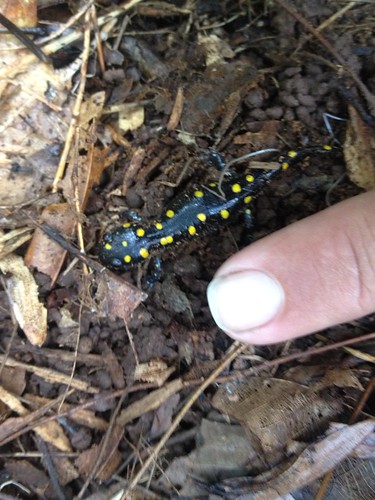