Tony Bulmer one of the lead Naturalist at Walney E.C. Lawrence Park briefs the public about the program prior to going out.

Another great turn out. Tony led this group while Mike and I assisted. We hit an area hoping to encounter wood frogs but no such luck. The wood frog’s breeding period had come and gone but we were able to observe other species.
Our first encounter were some rather large Spotted Salamanders and some pickerel frogs.

There were also an abundance of bull frog tadpoles. Mike and I filmed some Amaerican toads calling and amplexing in another area of the park this night.

One frog actually tried to amplex with my monopod!! Its amazing how the desire to reproduce supercedes all other instincts such as to fleeing from potential danger. 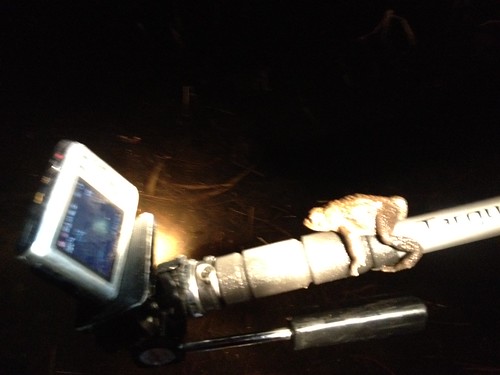 No wood frogs but a good bit of phib diversity to make this a worthy trip.

amplexus am toads vocal
Watch this video on YouTube.