Locating identifying and capturing the snake

The relocation and subsequent release 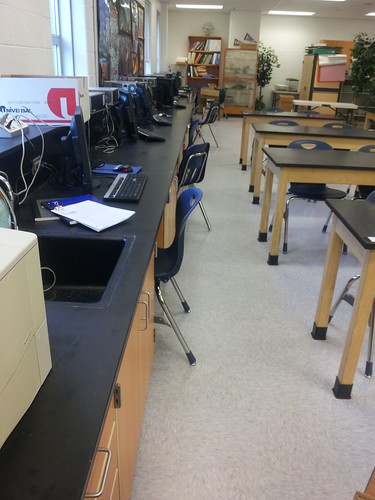 (above is an image of where the snake escaped to. See the line of chairs and computers agaisnt the wall on the left of the photo-yea that right under all of that!!)

Whenever you consider obtaining a snake as a pet or maintaining a wild one in captivity for even a short period of time be sure to secure that the enclosure they are in is secure. Snakes are escape artist and if your enclosure has the slightest flaw they (snakes) will exploit it and escape. 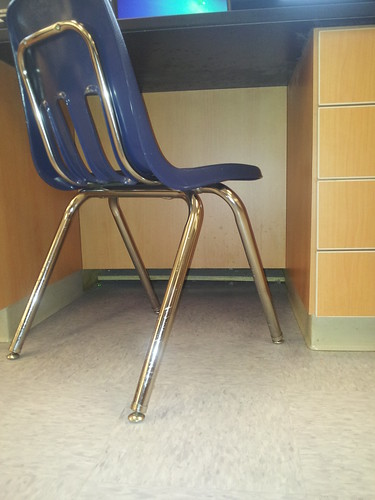 (above in this photo is an idea of where the snake sought refuge. As you can see there is no way for a perosn to fit under that baseboard other than trying to reach an arm under there. Even that had its limitations. That snake could have been anywhere under there. Thanks to Harrison’s ingeniuos plan of taking pic with a cell phone worked out part of the problem we had to solve which was finding the damn thing!!)

Such is the case of the 4 ft northern water snake that escaped its enclosure prior to a presentation. The animal of course is a nonvenomous species and the public was never in danger but the potential for a unique surprise to anyone not suspecting an encounter with such things could have been very interesting experience. 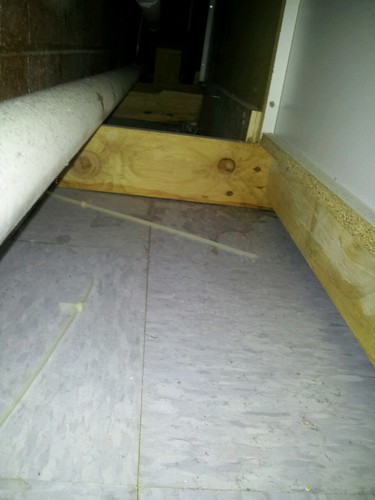 The photo above was taken between a wall and a row of computer cabinets where the snake was believed to have been hiding. Access to the area was extremely limited given the width between wall and cabinet was slightly over one foot wide. The pic was taken using a cell phone and was done so by blindly sticking my hand behind the wall and taking a “blind” photo. This gave me a view of what the area looked like behind the cabinets and hopefully would be able to see if the snake was actually there or not. I wish I could take the credit for this idea but the reality is that the idea was from a student Harrison Gust. Brilliant idea on Harrison’s part. 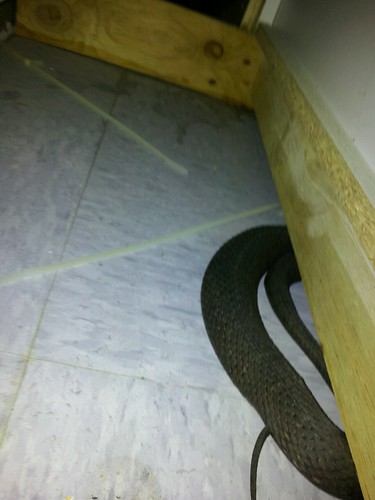 Well as you can see I was able to locate the snake and this was encouraging but now we had to figure a way to capture it without harming it and damaging any of the cosntruction of the wall or cabinets. To make a long story short our plan was to take out portions of the wall where the cabinets were locates (to the right in the photo where the snake body can be seen.) if this option didnt work plan B was to send in a volunteer who was small enough to climb in and wrangle the snake that way. This option was absolutely the last resort given the only one small enough and crazy enough to do this was a another herp enthusiast and student Kyle Appelbaum. Fortunately it didnt come to this and in the end we were able to corner it and I was able to remove it unharmed. The snake has released back into the wild unharmed A very frighten look and yet embarrassing pose of me while on Ghost patrol at Walney Pond Last Night. Note the orb in direct line with my headlamp LOL. Ah the jobs only a wild life biologist can give to her volunteers. Actually had a good time great lady to work for. Tonights mission objective: To deter the night pirates from poaching turtles out of Wlaney Pond. Has anybody mentioned to our boss that the pond was frozen? Final report-no turtle poachers apprehended and the Wildlife Biologist successfully conducted her operations without a hitch. This unforutnate deer was discovered caught between the fence post nearBalmoral (Compton Road) in Novemeber 2009.

Was called by a resident living near Pleasant Valley road in Centreville to remove a black racer from their patio. Apparently this female racer decided she was going drop her eggs inbetween a crevice along the steps connecting the outside patio to the house. One of the resident homeowners wanted the snake gone dead or alive. Fortunately the husband called and asked me to come remove it (alive). The bitter sweet end to this story is that I was able to dislodge the snake uharmed and relocate her safely but in the stress of it all she dumped her eggs in the sack I used in transporting her to nearby habitat.