My experience encountering eastern black rat snakes has mostly been uneventuful. Most of the time I am able to walk right up to them and pick them up without any issue. But on occaision they can show defensive posturing and even strike if you violate their personal space. In this short vid taken at a Fairfax County Park Trail partner Mike Gregory experiences one of those moments when its not a good idea to try and pick up Virginia’s largest snake. check out this exciting encounter

Well plans changed for today. Originally scheduled to make a trip to Maryland to visit my dad on his birthday but he decided that rescheduling the visit for another day. So I called up Mike to see if he wanted to go look for Mole King Snakes or just herp in general. Didnt take much to twist his arm so off we went!

We decided to go to a few parks in Fairfax county where we have permission and can access given our staus with the park system.
Our first encounter was not in the form of scales but in feathers, There were wood peckers everywhere in particular northern flickers-and I mean everywehre!! Mike and I left the meadow area and worked our way along a creek bed looking for any sign of phibs or reptiles. The skies were clear and sunny and the temps a cool mid 50’s and with no rain not the greatest conditions for reptiles. We followed the creek until it formed a wetland area that bordered a larger stream. Crossed the stream followed up a road bed though some cedars. 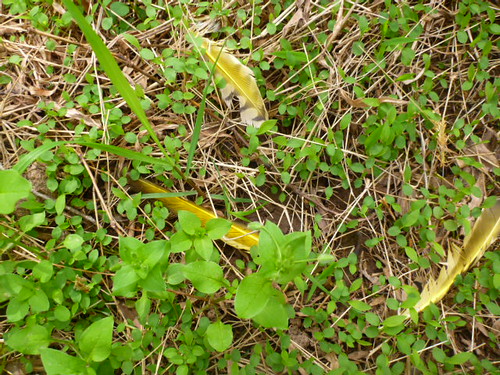 On our way we found a pile of flicker feathers and an “owl pellet” lying on the ground. 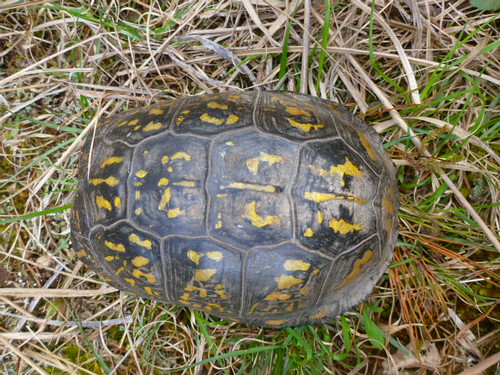 We also found an eastern Box turtle. The road took us to an abandoned house site-or barn area. Lots of debris lying around and perfect conditions for the elusice mole king we came to find. Well after numerous flips of tires and carhoods and sheet metal roofing material no sign of the mole king. Right about the time we were to move away from the site I lifted an old car seat and dislodged a small broadhead skink. 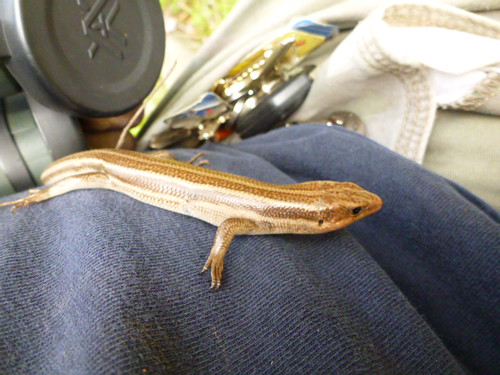 Took some pics of it then let it go. Again flipped more debris but nothing. Then as we were heading back toward the road bed I found another car hood. flipped this one and there underneath and beginning to stir was an adult black racer. Mike hadnt seen one before so this was going to be a treat! Well I picked up the racer starting to admire it when Mike yelled look another one. So now we were dealing with two snakes but the second one want a racer but instead a an adult black rat!

So I grabbed both and we began filming and taking pics like we always do. As were releasing the snakes and staring to replace the hood as we found it Mike spots a third snake tucked in the crevice of the carhood. Another adult black rat!

Well that was exciting and we figured that alone was worht the trip. As we left this area we made our way to higher ground where a large outcrop of rocks rose well above the meadow and cedars. At the summit Mike flips a rock and yells SNAAAKE!. I come running and we both ascertain it is indeed our target species- a baby mole king!!!

We photo and vid the snake then released it and continued to look for more-maybe a copperhead. No copperhead but I was able to find two eastern worm snakes on that site before we left.

After lunch Mike suggested we try anther stream valley not far from his house. We heard from a park visitor that he had found red bellied water snakes a species that should not be found this far north. But given how humans have been repsonisble for so many other species of critters and plants to our area did not seem far fetched to us. So we decided to investigate. At least we could find some common water snakes if there were no red bellied ones so we decided to go.
No red bellied but we did observe a single water snake basking just out of our reach so we too ka pic or two then left for another section of the same stream a few miles away.

Arriving at our last site for the day Mike pointed out how there are a couple of habitat areas that have great potential. The first area comprised of mix hardwoods followed by wetland separated by a paved bike path then riparian zone and then the main stream. Some Drains bisected the bike path allowing for the wet areas to drain excess water into the main stream. At this location we found in the woods worms snakes and in the wetlands closest to the bike path Mike found a nice spotted salamander. When Mike finds something we know it!! ” Mark!! I got a spotted or Mark!!!! Snake!!!” then I come running. Well soon after Mikes Spotted sal discovery I hear SNAKE!!!. So I come running and quickly discover for myself the large bodied water snake.


HerpBlitz4-5-12 (8).MTS
Watch this video on YouTube.
What Mike hadnt noticed was that right next to her was aother snake but smaller-most likely a male. What a day we had!! 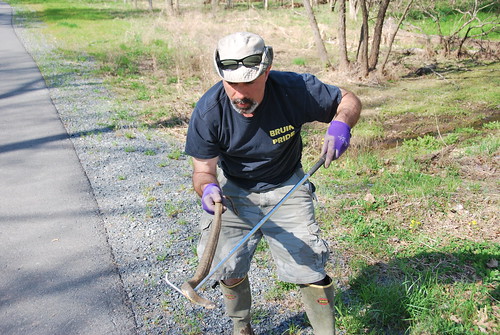 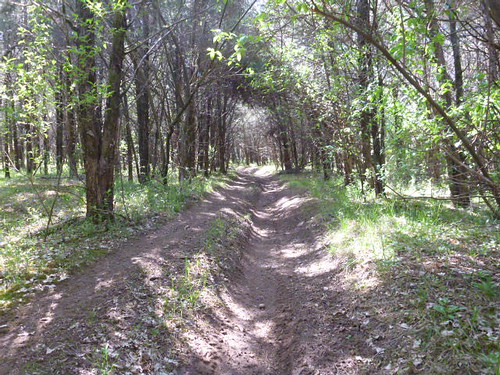 Went out today to try and find a Mole King Snake in a meadow/woodland habitat area a few miles from home. I had learned from fellow naturalist that his particular site was certain to produce the kings and that now was a good time of the year to find them.

the cool thing about this porperty is that is has a variety of habitats with transitional edges that make perfect conditions not only for certain reptile species but for mammals and birds too. Today I was only interested and trying to focus on the Mole Kings but one cant help noticing all the other natural and wonderful distractions of flora and fauna that exist in this region.

Well I never found the Mole King snake but will definitely return for more trips to try and find one and other species. I did find under some old tires a black racer which at first was difficult to determine if that is what it was when I saw it laying there as if “asleep”. Turned out the snake was in its “blue phase” in otherwords getting ready to shed. Snakes shed theier skin whole (if healthy). Its their way to rid themselves of any parasites and to accommodate their new growth.

After wrangling the racer and letting it go I decided to try another locationto look for another species of black and the largest snake we have in our area the eastern black rat snake.

Mike’s trail takes us to Pennsylvania where he discovers a couple of new animals for the species list and as an additional bonus some interesting snake courtship and mating behavior. Shown in this video are multiple male garter snakes trying to court and mate with a single female. Nothing unusual about this behavior in the snake world but to someone who is either weary of snakes could be quite an unexpected shock if theywere to stumble upon such an event.

Went out herping two days after Tropical Storm Lee made its way through our area. Much of the water receeded and the high pressure system that follwoed produced some excellent weather conditions for herping. I spotted a lot five lined skinks and was ablel too catch a healthy sized adult black rat snake near The CBA Barn.

Herping in Clifton: Flood Aftermath
Watch this video on YouTube.